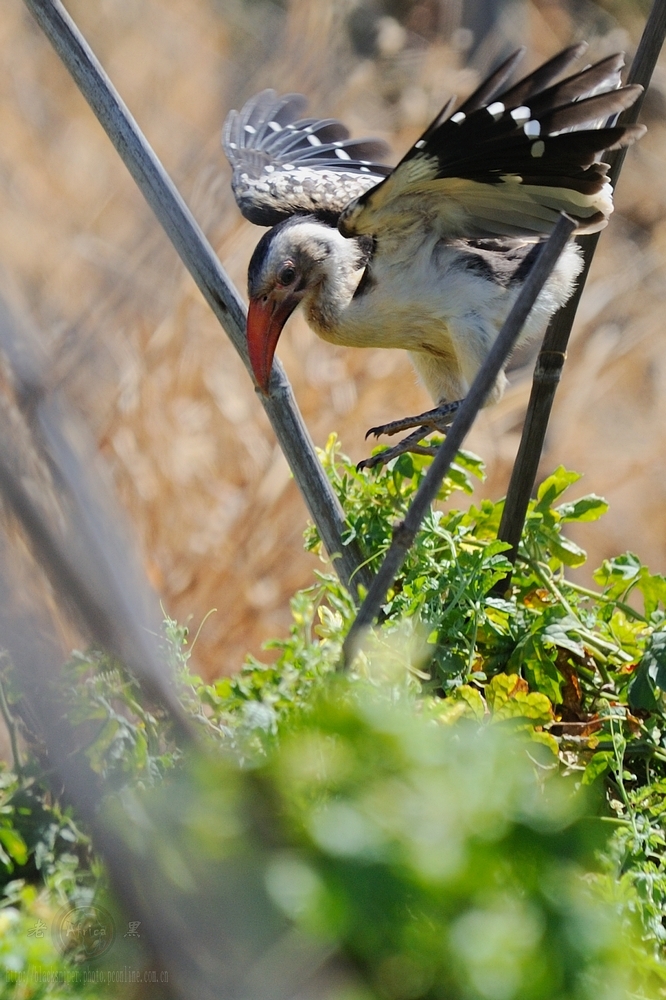 非洲苏丹 南库都尔番州 生态 鸟
作品简介
红弯喙犀鸟(Red-Billed Hornbill)：主要分布在撒哈拉南的东非直到南非。其体型中等修长，雌鸟体型略小。红弯喙犀鸟有白斑黑翼，眼神专注，红喙下弯而坚实有力，可以喙翻土啄食。它们通常单独、成对或小群出现，跳跃、飞行，搜寻昆虫，是我们营地菜场的忠诚卫士之一。
Red-billed Hornbill (Tockus erythrorhynchus) is a hornbill with length of 43-46 cm. The slender, all red-hilled and white-spotted black wings render this hornbill unmistakable.
Female is similar to male but is smaller and has a smaller hill. Immature resembles adult but has a much
shorter, brownish-colored bill. This species is omnivorous, taking insects, fruit and seeds. It feeds
mainly on the ground and will form flocks outside the breeding. Red-Billed Hornbill occurs in semi-arid
savannahs and thornbush countries of Southwardly Sahara, throughout eastern Africa to southern Africa.
Its monotonous “kok kok kok” call is a characteristic feature.
These images were captured in the farm where various vegetables are planted to cater for our staff needs. Red-Billed Hornbill appears over there to search insects so as to guard vegetables’ growing.
相关推荐